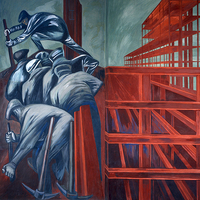 Orozco's Epic of American Civilization provides a powerful critique of the conquest and colonization of the Americas. And yet it makes no mention of the institution of slavery in the formation of its modern nation-states. In this talk, Mary Coffey will address this silence and offer speculative readings of the Epic that speak to the specters of slavery and rebellion that haunt the mural. She will pay particular attention to Orozco's vision of the "Two Americas," as well as to the "Modern Industrial Man," asking what possibilities are opened by reading him as a person of African descent. We will walk over to the mural cycle for the Q&A at the end of the lecture.