A golden boy from a successful African American family loses his footing in this alternately tender and adrenalized new film. Special Advance Screening! 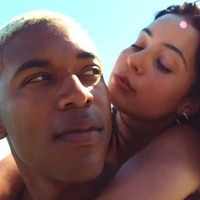 “We are not afforded the luxury of being average,” says Ronald; his upwardly mobile, African American family is anything but. A win-at-all-costs father, Ronald (Sterling K. Brown) drives his son Tyler (Kelvin Harrison Jr.) to new heights in school and in sports. But after Tyler unravels, his sister Emily (Taylor Russell) is left to reconstruct her life amidst the ruins of her once-enviable family.

Set against the vibrant landscape of South Florida, and featuring an astonishing ensemble of award-winning actors and breakouts alike, Waves traces the epic emotional journey of a suburban African American family as they navigate love, forgiveness and coming together in the aftermath of a loss. From acclaimed director Trey Edward Shults, this Telluride Film Festival hit is a heartrending story about the universal capacity for compassion and growth even in the darkest of times.